In the first known study to quantify the performance of Facebook’s political ad policy enforcement at a large and representative scale, researchers found that when making decisions on how to classify undeclared ads, Facebook often missed political ads while falsely labeling others as political. The political ads that Facebook misses also disappear from its public archive, putting them out of reach for public scrutiny.

This summary is based on “An Audit of Facebook’s Political Ad Policy Enforcement,” to be presented at the 31st USENIX Security Symposium in August 2022.

Click here for a PDF of the research paper.

Click here for a PDF of the summary of findings.

Click here for a library of sample advertisements that were referenced.

Click here for a toolkit to share information about this paper and the findings via social media.

Researchers with imec-DistriNet at KU Leuven in Belgium and New York University’s Cybersecurity for Democracy conducted a comprehensive audit of Facebook’s political ad detection and policy enforcement. The researchers examined 33.8 million Facebook ads that ran between July 2020 and February 2021—a timeframe that included elections in both the U.S. and Brazil. This is the first known study to quantify the performance of Facebook’s political ad policy enforcement system at a large and representative scale. The researchers’ review found that:

Facebook’s transparency via its Ad Library API was not sufficient to do this analysis. To capture publicly available ads that were not included in the API, the researchers created an alternate pipeline to gather ads from the web portal. Mandated universal ad transparency would alleviate the need for use of alternate methods (Figure 2).

Facebook imposes increased authenticity and transparency requirements for “ads about social issues, elections or politics” in around 120 countries, by requiring advertisers to confirm their identity and location and “declare” who funded the ads, which then appears as a “disclaimer” for the ad. In this analysis, the researchers use the shorthand “political” to refer to this class of ads.

Because not all advertisers self-declare political ads, Facebook conducts additional reviews to ensure all political ads are captured. If they find undeclared political ads, they take these ads down – that is, they remove them from the site. In addition, the platform sometimes creates temporary requirements, such as the moratorium on political ads around the U.S. 2020 elections.

The study identifies a number of risks that arise from Facebook’s failure to accurately detect and flag political ads:

Researchers who study political ads on Facebook use data that the company provides via its Ad Library API, Ad Library Report, and Ad Library web portal. However, this data is insufficient for conducting an analysis like this (Figure 2). For example:

The research team thus created a novel large-scale data collection pipeline to archive data from the Ad Library web portal, which lists all active ads for a given advertiser, regardless of whether they are political. The resulting data set is likely the most comprehensive archive of Facebook political ads for the time period, which includes the U.S. and Brazilian elections, since it also contains the ads that Facebook missed.

To address the inconsistencies in its ad detection systems, the research team recommends that Facebook:

Given both the risks and Facebook’s reticence to make changes that affect its bottom line, outside actors may need to intervene. Legislators could harmonize definitions of both political and issue ads across platforms to remove ambiguity. They could also set enforcement and transparency requirements that would be overseen by regulators and come with penalties if the requirements are not met. Finally, the team joins calls for mandated universal ad transparency, which would provide independent researchers the data necessary to conduct audits such as this one and allow the public to scrutinize and better understand the political ad ecosystem. 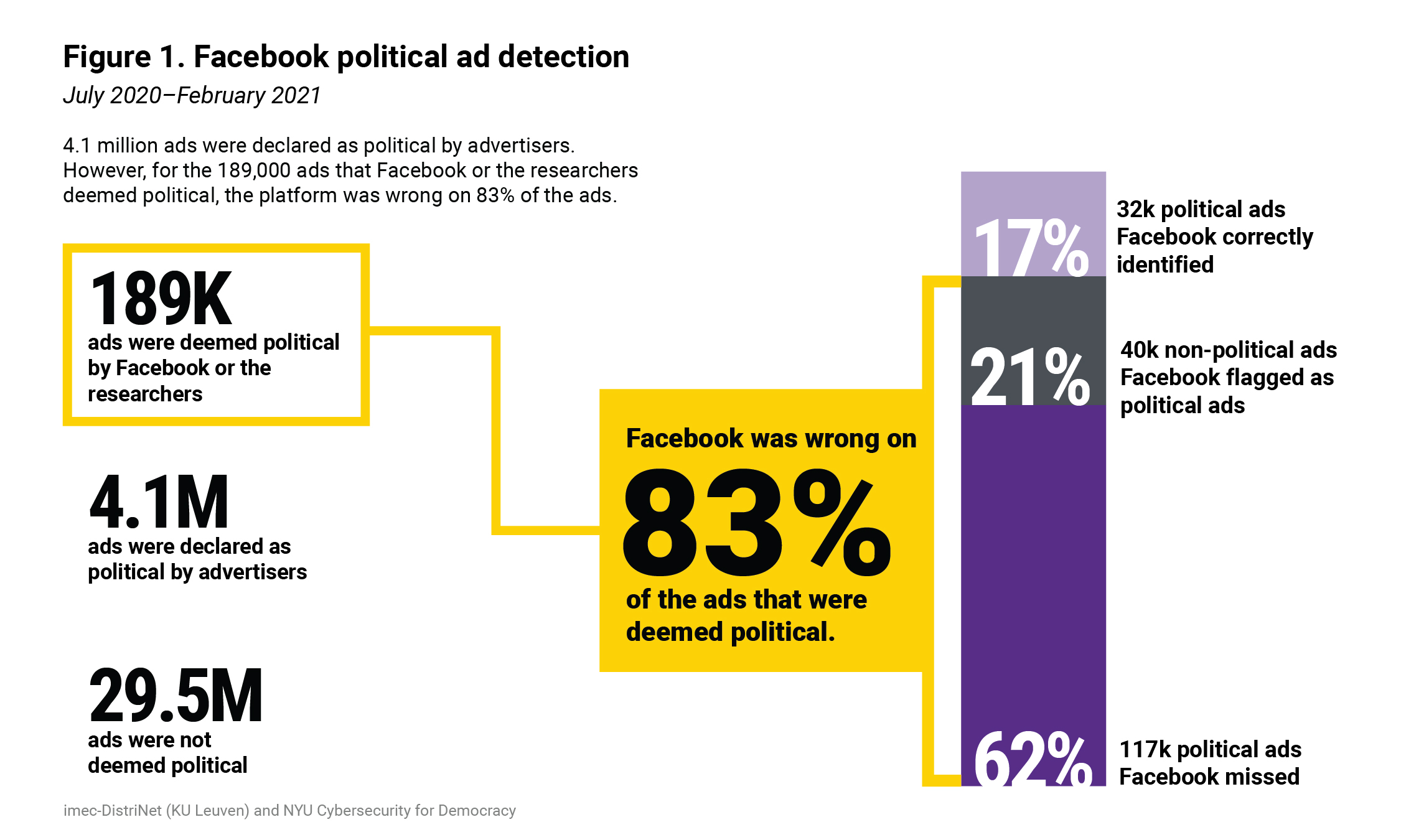 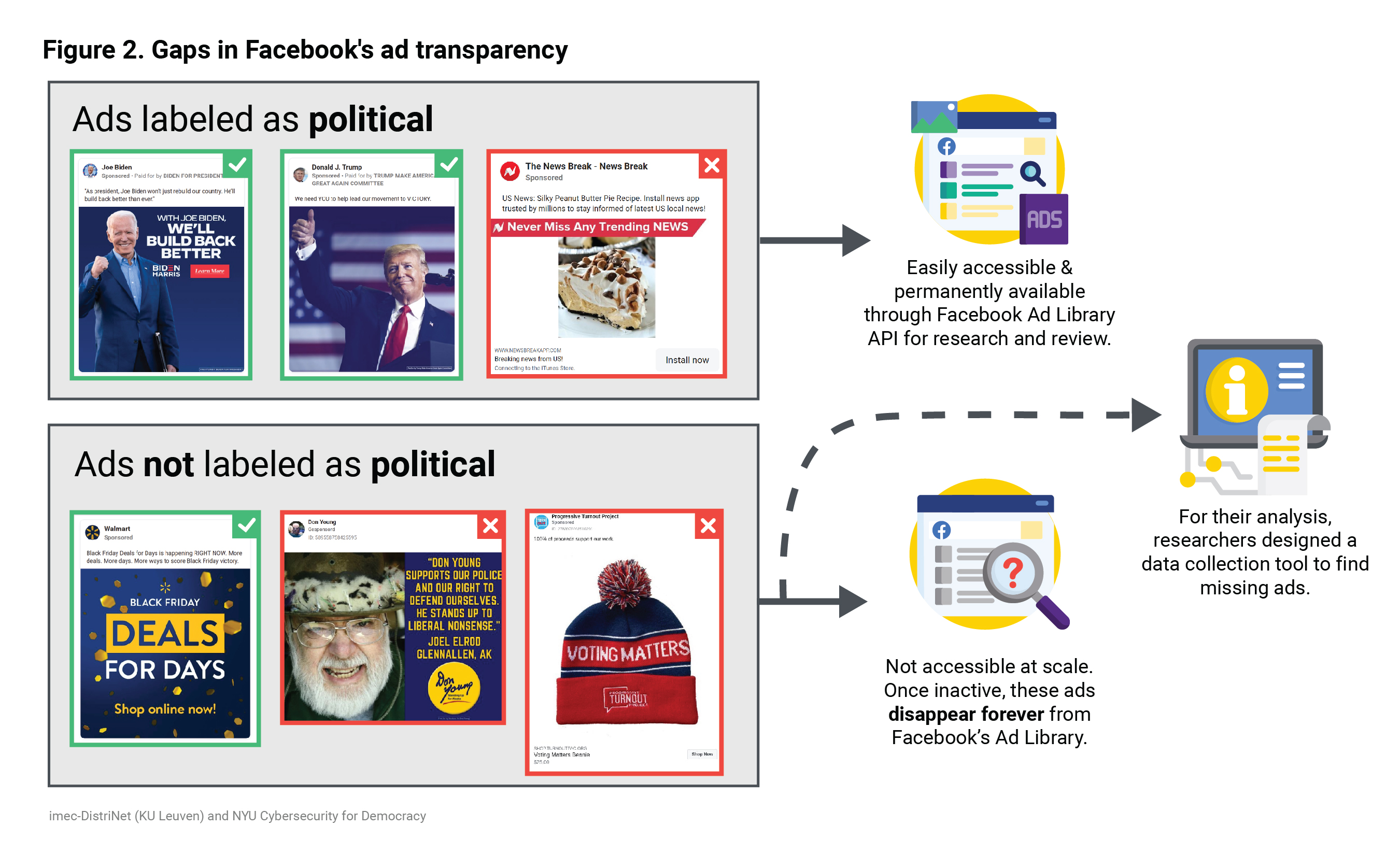 Graphics are available for public use with the following attribution:

About Cybersecurity for Democracy

Cybersecurity for Democracy is a research-based, nonpartisan, and independent effort to expose online threats to our social fabric – and recommend how to counter them. It is a part of the Center for Cybersecurity at the NYU Tandon School of Engineering.

Research at imec-DistriNet enables software, systems, and services that are secure, resilient, performant, and robust while open and adaptable. Fundamental, strategic, and applied research activities in the areas of Secure Software, Distributed Software, and Software Engineering converge in this perspective. In addition, imec-DistriNet delivers valorization in an industrial context. The imec-DistriNet research group is part of the Department of Computer Science at KU Leuven.